The Story about my truck named Faith

The Story about my truck named Faith

I do not quite know where to begin this story. I do not know if anyone else even really cares about it. But I do. And I would like to share it with all that care to know.

They were crying and yelling and having a heated a argument. During this event my “aunt” grabbed be my arm and asked me a question that literally turned my world from the beautiful vivid colors that God created to that of a literal black and white photo that seem to be a “still shot” of time. As this image tore into two pieces, my mother on one side and my father on the other, I ran as fast as I could to my parents bedroom dresser drawer. I seen a man there on a cross. He seemed like “HE” knew what shock, sorrow and pain was all about.  Should I begin here? No.. let’s see.

How about after my parents divorce? I was a street kind of child doing everything I could to turn off reality. During this time I became so sickly that I ended up in the hospital. I had ruptured a hole in my lung and broke blood vessels in my heart. While lying on a hospital bed I wondered if I was going to take that very next breath. I was near the age of 15.

Oh how I remembered seeing my parents standing in the door way! Together! Something that I had hoped for. I was so happy that I wanted to cry out loud. I did not have the air in my lungs to do so but I did remember feeling the tears of joy run down my face. Hmmm. No! Not here either.

Maybe near the age of 22 having been married for three months and worried that my life would end up in divorce after twenty three years of marriage. My being so frightened that my beautiful bride would end up betraying me like what had happened to my mother. After the divorce I went crazy. I started to destroy this temple of my body.

Or, when at the age of about 23 when I laid on a gurney wondering if the placement of the blanket over my head meant I had died and was having an out of body experience. I should not have went outside of the club in such a drunken state and try to fight three very harmful men. Thank you Ron Abuan for saving my life that night outside of the Fremont Black Angus.

Again, in 1990 when our own attorney whom we trusted and betrayed us. His contributions to leading us astray in our pursuit for justice. A land development project gone bad due to greed and corruption by those we thought were our friends. This was a time when I felt that I had enough and I was going to take justice into my own hands. I would be judge and jury passing out the penalty for betrayal. In my mind I had endured about as much as I could. This man called an attorney, Ken, caused my life to shatter once again. It was time! This was the day.

I was going to finish watering my garden at 638 Marshall Ave., San Andreas California near the year 1999. As I was telling my spirit that I was sorry for the crime that I was about to commit I poured water down a gopher hole.  Then, right before my eyes the ground literally opened up to about 30′ deep right before my eyes. I felt the chill and fear of my Lord. And yes! I got the point.

That hole took three truck loads of Riprap (stone) to fill. I hired Craig Joses, a friend to bring the rock.  Should I begin here? Nope!

Or in 2003 when I hit a gas main, my trucking still running and resting over as gas leaked into the cab. The door hinged shut. I was trapped. Would this be the way life will end. Burning for my sins? Should I begin here? No… I will come back this and the other time in my life when faith must have bought me forgiveness.

No, I think I will start the story about Faith with a truck that I purchased from a family member who lost her husband not long ago.  Yes! I think that is where I will start this story.  Well, what would a story be without a picture of “My Truck Named Faith” 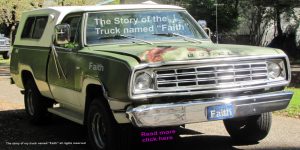